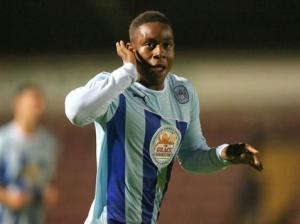 We’re A Match For The Best In The Division

This time last month we had just lost our second game on the bounce and were back in the relegation zone. What was worse was that we were heading towards our toughest run of fixtures this season, Sheffield United, Wolves, Leyton Orient and Walsall. Most Coventry fans at that point would have taken 5 or 6 points from those games and hopefully not being too entrenched in the relegation zone.

We end the month now just 5 points from the play-offs having taken 10 out of 12 points from that run of fixtures, playing our most controlled football of the season and only an Andy Webster miss from taking 12 from 12. The loss of Cyrus Christie did little to affect our performances despite having started the season as one of our best attacking players from full-back position.

The onus now is to continue to prove that we belong in the upper echelons of the division by sustaining our form now that we have a run of games in November against sides that we would be expecting to beat, except maybe Bradford and the unmentionable Buckinghamshire football club.

The Emergence of Aaron Phillips

Although he only started one out of a possible five games following Cyrus Christie’s injury during the Peterborough game, Aaron Phillips has emerged as perhaps the best out of the crop of academy players who hadn’t played for Coventry before this season. Before October started Aaron Phillips was, as the BBC journalist Tim Vickery says, not even a household name in his own household. Now he has his first goal and start to his name in League football and staked a claim for man-of-the-match during Saturday’s win against Walsall.

The first glimpse that many Sky Blues fans had of him was from the bench during the Sky TV match against Sheffield United where he made three impressive tackles a minute after coming on. Since then he came on to score against Wolves and finally started his first game during the Walsall encounter. What makes his emergence all the more impressive has been that our second-choice right-back Jordan Willis, who had been deputising for Christie, also had been highly impressive during the month of October. Hopefully this will make the inevitable knock-down price sale of Cyrus Christie less of a blow.

The End of the Road for Manset?

Saturday’s game against Walsall came with the revelation prior to the match that Mathieu Manset, this season’s serial substitute, was set for a loan move. After the game Steven Pressley’s comments intimated that Manset was frustrated not to be starting games at the club, despite there being two in-form strikers as well as Manset having the fitness levels of a 60-year-old lifetime smoker. Pressley also suggested that prior to signing Manset he thought that he could turn around his fitness levels but it has become clear that the Frenchman is unable to fit into Pressley’s aggressive pressing playing style. This to me seems like an irreconcilable difference and I would be surprised to see the Frenchman play for the Sky Blues again.

The Friday evening signing of Norwich youngster Jamar Loza on a 28-day loan also suggests that relations between Manset and Pressley have reached the point of no return. In Pressley’s post-match interview he added that he had never seen Loza play in the flesh and had only signed him to fill Manset’s now vacant space on the bench. What this could mean is that Pressley has a more permanent replacement in line, reportedly the trialist and ex-Birmingham striker Jake Jervis, in line to sign a permanent deal in the next couple of weeks.

A Turning in the Tides in the Ricoh Row?

Last month saw the first interview that our secretive owner Joy Seppala had given to the press. The quiet from the council had been deafening with some fans asking why the council has not even so much as commented on Joy’s argument that the club should own the Ricoh Arena. Last week though Coventry City Council leader Ann Lucas finally spoke out at after fans protested outside the council’s offices. Lucas has argued that the current judicial review has prevented the council from offering a riposte to Seppala’s comments but also that they would be willing to sit back down and speak to the football club and hammer out some form of a deal.

Although both sides both appear to be saying the same thing, their door’s is open and they’re waiting for the other side to talk to them. The success of the Get Cov Back to the Ricoh campaign suggests that less of the blame from the fans is being apportioned to SISU and more pressure is being put on the council to speak to the football club. It still seems that even if either side was willing to be pro-active in coming to speak with the other that the demands either side are making seem incompatible with each other. However the main hope of a deal being done is the pressure being put on the elected council members who could start to fear being forced out of office should the pressure on them becomes much greater on the side of Coventry residents. Hopefully this month has seen the start of a process that sees the club return to the stadium that had been built for it.

It’s AFC Wimbledon in the Cup

The draw for the FA Cup first round proper was made today and it has seen us drawn against AFC Wimbledon. With the current state of the club obvious parallels have been drawn with the South London side’s situation where they had their team forcibly moved to Milton Keynes. For some Coventry fans, who are deluded in my opinion, the fear is that SISU want to move Coventry’s most popular sports team to the ripe sporting market Northampton, you know where they have one of the country’s most popular Rugby Union side, an established football team and a successful county cricket side as well. This kind of thinking is obviously ridiculous although there is the very real danger that Coventry City ceases to exist in its current form and we have to think about doing what true Wimbledon fans had to do.

This whole situation though has made me feel an affinity with Dons supporters and my hatred of that other team has risen infinitely over these past few months. Hopefully Coventry fans will share my sentiments and choose not to travel to Buckinghamshire on the 30th of November and instead go down to South London on the 9th and watch two real football teams with two real sets of fans. Even though I choose to go to Northampton, I have no interest in supporting a club that doesn’t stand for Coventry City. The coincidence of facing up to away trips to one real and one fake club from the same root should hopefully help Coventry fans make the decision to support real football by boycotting Milton Keynes and putting your money towards the real Wimbledon.