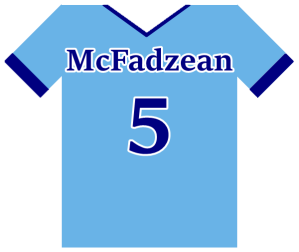 As recently as October, Kyle McFadzean looked set to go down as a misfire from last summer’s transfer business. The experienced defender had been brought in to add physicality and leadership at the back, however, his lack of pace combined with a tendency to charge recklessly into challenges and attempt raking passes that were beyond his ability had seen him cost the team a series of goals – most notably, during the 4-0 defeat at Rotherham United. The more mobile and considered Michael Rose and Dominic Hyam looked set to be our centre-back duo for the remainder of the campaign, only for a timid showing against Fleetwood Town that led to Mark Robins opting to re-introduce Kyle McFadzean to the side at the heart of a back three.

With mobile centre-backs either side of him as cover, McFadzean’s physical presence and aggression in the challenge could be facilitated while lessening the risk of leaving gaps in the defence. The team was able to benefit from a backline that possessed both mobility and physicality, which went a long way to our impressive defensive record over the course of the campaign. By the end of the campaign, we got out of Kyle McFadzean exactly what we had expected at the time of his arrival at the club, even if it did take a while to get there.

As one of the few players with Championship experience in the squad, Kyle McFadzean has an important role to play next season as a leader within the dressing room. That extra physicality at the back McFadzean provides could be important in the team continuing to keep things tight as they step up a level in quality, however, that combination of a lack of pace and the impulsive streak in his game is a concern against the more technically capable and mobile forwards in the Championship. Much like Michael Doyle, McFadzean may help us in the adaptation period after promotion but he is a player that may have to be transitioned out of the side over the course of the campaign.