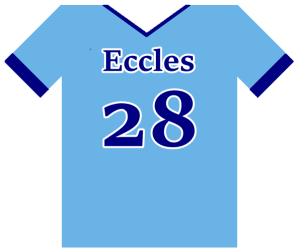 At Club Since: n/a (Academy Product)

If there is only going to be one academy player who breaks into the first-team over the next year or two, it looks likely to be Josh Eccles. The young midfielder has been inching his way into first-team contention over the past season, regularly making the bench and starting in cup competitions. His first league start for the club came in the 2-1 victory over Rochdale last November, where he acquitted himself reasonably well playing alongside Liam Walsh in central midfield.

A composed central midfield player, it isn’t quite clear what Josh Eccles’ best role in the centre of the park is. While he has seemingly been earmarked as a sitting midfielder who is currently Liam Kelly’s understudy, Eccles has shown energy and mobility in the handful of games he’s played for the first-team to suggest that he could be capable playing more of a box-to-box role.

Sitting on the verge of the first-team, the next step for Eccles is to take the next opportunity that comes his way and make sure he gets that first run of starts at senior level. There is little pressure or expectation on his shoulders, however, if he doesn’t progress over the next year or so, it will become increasingly difficult for him to make that breakthrough.