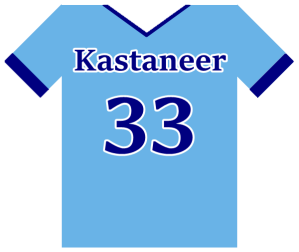 They say first impressions count, Gervane Kastaneer certainly made a highly encouraging one in a Sky Blues shirt. Smashing in a powerful effort to seal a win over Bristol Rovers last August, Kastaneer looked like he could have been the kind of maverick individual match-winner that players such as Duckens Nazon, Bright Enobakhare and Franck Moussa had been in previous Coventry City sides managed by Mark Robins. However, first impressions can sometimes be misleading. While the sending off against Portsmouth a few days after that winning effort against Bristol Rovers was a troubling sign, it was the subsequent inability of Kastaneer to replicate the kind of decisive quality that saw him fall out of favour.

There is clearly a very talented footballer inside Gervane Kastaneer waiting to be unleashed, which is intriguingly combined with burly upper-body strength that could potentially make him a very difficult player for defences to contain. However, it’s a lack of awareness that makes Kastaneer difficult to fit into a team environment. While he isn’t the type of talented forward to just stand around and wait for the ball to be passed to him, that deficiency would probably be better than Kastaneer’s sheer recklessness without the ball where he charges into opposing players without regard for potential bookings or whether his team-mates are in a better position to win the ball back.

Ultimately, Kastaneer’s deficiencies could be forgiven in return for match-winning moments akin to that debut goal against Bristol Rovers. Perhaps Mark Robins could have gotten more out of Kastaneer last season had he been more patient with him, however, the scale of those deficiencies meant Kastaneer gave himself too much to do to merit closer attention from the manager. Clearly a player that the club will be looking to offload some time sooner rather than later, I have to say that I’m intrigued to see what Kastaneer could be capable of if he somehow found the right team and manager to unlock his potential.