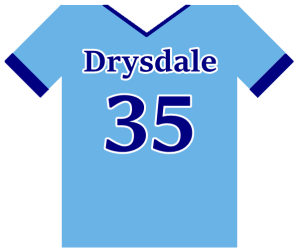 With the strength that we currently possess at centre-back, it is going to be tough for anyone from the under-23 team to break into the side in that position, if there is one player who will do it, it looks to be Declan Drysdale. Signed from Tranmere Rovers in January 2019, Drysdale has spent most of his time at the club with the under-23 side, competing with Morgan Williams and Jordon Thompson to be the best-placed centre-back to make the breakthrough into the first-team. Drysdale has seemingly moved to the top of that particular pecking order due to his composure and quality with the ball at his feet, able to receive the ball under pressure and provide quality with his passing out of defence.

Those performances at under-23 level were rewarded with a league debut in November 2019 against Rochdale – stepping in for the suspended Kyle McFadzean. Playing on the left of a back three, Drysdale initially looked exposed for his lack of pace, which Rochdale appeared to target in the build-up for their opening goal. However, the young defender rallied impressively from a tough start, demonstrating a grit to the defensive side of his game by putting in two or three impressive blocks and challenges to nullify Rochdale’s attacking threat as the game wore on while also demonstrating the confidence on the ball that is the hallmark of his game.

With the club making the step up to the Championship this season, Drysdale’s task in breaking into the first team has become that bit more difficult – especially with Josh Pask now fully fit and one or two additional signings at centre-back rumoured to be in the offing. However, the recent three-year deal handed to him demonstrates the belief that the club has in Drysdale’s ability to eventually make the breakthrough. A season-long loan move to the right club this year could be the making of him.