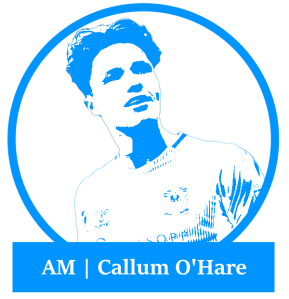 Brought in as a key piece of summer transfer business to provide the spark in the final third to create and score goals, Callum O’Hare has steadily matured over the course of the campaign. In his first appearances for the club, O’Hare looked a player who could take the league by storm, but didn’t quite have the same influence once handed a run in the starting line-up. The step back O’Hare has had to take in returning to the role of impact sub, could well be the making of him over the longer-term. As a player who is constantly trying to make things happen, staying in the starting line-up while in a rut could have burned him out. Instead, he’s been able to build his confidence back up and is looking again like the player he was when he first arrived.

What is most notable about Callum O’Hare is how incredibly tenacious he is in addition to being a talented, fleet-footed, young attacking player. It underlines a desire to be a constant influence on a game – whether that’s driving towards the opposition with the ball or putting himself in for 50/50 challenges. At times, the issue with O’Hare has been that he tries to do too much, sending himself into dead ends when it may have been better to take a moment’s pause to assess his options. However, in a team where almost everyone else takes that pause, O’Hare’s role is to be that fast-forward button. With his decision-making improving, the hope is that between now and the end of the season, O’Hare can become the consistent source of goals and assists that could tip us over the edge in our promotion bid.