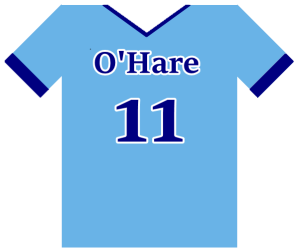 Signed on a permanent deal to much excitement over the summer, Callum O’Hare is still some distance away from being the finished product even if he has a lot of the qualities to get there. The only player to feature in every league game at this stage of the season, a return of two goals and no assists is a little underwhelming for someone who was recently seen as the successor to Jack Grealish at Aston Villa. While goals and assists can be a limited way to assess an attacking player’s impact, it underlines that it is O’Hare’s decision-making that is the biggest aspect missing from his game.

It is not a lack of talent that is Callum O’Hare’s issue. A skilful player who can run at defenders and either create space by beating them or draw fouls to win free-kicks for the team, O’Hare offers the team something that no-one else in the squad is capable of. Furthermore, the level of commitment and energy with which O’Hare applies himself without the ball is laudable and is another key reason why he has been used so often this season. However, that level of commitment and energy can also be a draw-back to his game, which can see him run himself down blind alleys and lack a level of composure when playing through balls or taking shots.

Perhaps the step up to the Championship has come a year too soon for O’Hare, who hadn’t quite become a dominant player last season in League One. This early step up could prove to the making of O’Hare, teaching him the standard he needs to be at if he wants to become the player he was hyped as being earlier in his career. There is the danger of him getting a little burned out by the experience of playing so regularly and struggling to make an impact, which is why O’Hare could probably do with some help via the signing of another ball-carrying attacking player who can ease the burden on him.